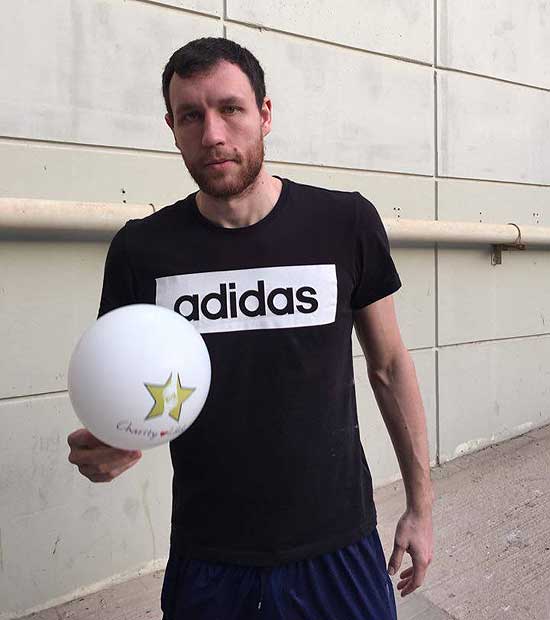 Loukas Mavrokefalidis was born on the 25th of July, 1984 and plays for AEK Athens at the Greek League. He was selected by the Minnesota Timberwolves in the 2nd round (57th overall) of the 2006 NBA Draft. Born in Jesenik, Czechoslovakia, Mavrokefalidis started his professional career at PAOK, moving to Thessaloniki from Kilkis, where his parents come from. From the first days of his professional career, PAOK coach Bane Preljevic took advantage of his height and decided to play him at the center position which, as it was proved later in his career, fit him very well. As a 2.10 m power forward-center, Mavrokefalidis, played for PAOK in the Greek Basket League during the Greek League 2005-06 season, averaging 16.7 points and 8.4 rebounds per game. He played in the Greek All-Star Game and he won the Greek League’s Most Improved Player Award that year. After many months of hard work, Mavrokefalidis was almost always a member of the starting five in PAOK, creating big problems to the opposition’s defense with his ability to get to the rim and make easy buckets or exciting dunks. He also became a defensive force, chasing down rebounds relentlessly, something that can be shown by the 8.4 rebounds per game that he averaged during the 2005-06 season. During the summer of 2006, Mavrokefalidis was signed by Virtus Roma of the Italian League, but he was not established as a key member of the team, averaging just 2 points and 1 rebound per game. In February 2007, he was traded from Roma to Pamesa Valencia of the Spanish ACB League in exchange for Roberto Chiacig and Jon Stefansson. On July 12, 2007, Mavrokefalidis joined Olympiacos. In 2008, Mavrokefalidis moved to Maroussi. In 2009, he re-signed with Olympiacos through the 2010-11 season. In 2011, Mavrokefalidis was signed by the Russian League club Spartak Saint Petersburg with a 2-year contract. He was named to the All-Eurocup Second Team in 2013. He signed with the Spanish League club FC Barcelona in May 2013. On 10 July 2013, even though the Greek media were saying that Mavrokefalidis was very close to signing with Olympiacos, he was announced as a signing of Panathinaikos. In the 2015 Greek Basket League playoffs, he was the best player for Panathinaikos, averaging 18.4 points, 8.1 rebounds (5.8 offensive rebounds) and 2.2 assists per game. On 10 August 2015, he signed a one-year deal with AEK Athens, where he is still playing up to this moment. Mavrokefalidis helped Greece win the bronze medal at the 2003 FIBA Under-19 World Championship. He also played at the 2004 FIBA Europe Under-20 Championship. In 2005, Mavrokefalidis’ contribution during the FIBA Under-21 World Championship was very significant, as Mavrokefalidis greatly helped the Under-21 Greek National Basketball Team win the silver medal, after losing to Lithuania by just two points in the gold medal game. A year later, in 2006, the senior men’s Greek national basketball team coach Panagiotis Giannakis became impressed by the young center’s abilities and called him to participate in the Greek basketball senior men’s training camp, one month before the 2006 FIBA World Championship took place in Japan. However, as he was selected in the 2006 NBA Draft by the Minnesota Timberwolves, Mavrokefalidis informed the coach shortly before the outset of the World Championship that he decided to go back to Minnesota and participate in performance improvement training camps, and thus he lost the team’s 12th man roster place to Sofoklis Schortsanitis. In 2011, Mavrokefalidis was given a 2-month suspension from all competitions by the Greek Basketball Federation, for refusing to play for Greece’s national team for the second consecutive summer. However, 2 years later, he played with Greece’s senior men’s national team at the EuroBasket 2013
Awards and accomplishments
Greek national team
2003 FIBA Under-19 World Championship:  Bronze
2005 FIBA Under-21 World Championship:  Silver
Pro career
4x Greek League All-Star: (2006, 2009, 2011, 2014)
Greek League Most Improved Player: (2006)
4x Greek Cup Champion: (2010, 2011, 2014, 2015)
All-Eurocup Second Team: (2013)
Greek League Champion: (2014)

We are a bunch of friends that share the same overindulgence to iniquity. Economic crisis has brought into light all the misfortunes of Greece's social welfare. It was time to take action. Motivated by sensitivity, we used our imagination to raise money for funding charities.